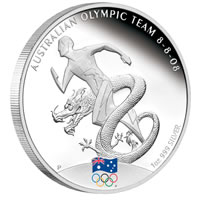 The 2008 Olympic Games commence on the 8th of August 2008 (8-8-08), the nation is looking forward to many medal winning performances and many life changing moments for the Australian Athletes. The Perth Mint is celebrating the 2008 Olympic Games with this 1oz 99.9% Silver Proof Coin. This commemorative coin is approved by the Australian Olympic Committee. The Silver design depicts the AOC's official Olympic Flag and Rings Logo in colour and a athlete intertwined with an image of a traditional Chinese Dragon. The coin is presented in a red presentation case and the 1oz silver proof coin is limited to only 8,808 coins being released.