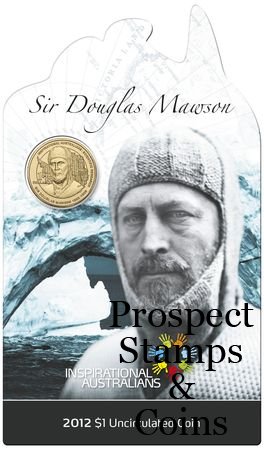 The Royal Australian Mint’s Inspirational Australians series commemorates people who have made an extraordinary contribution to our nation.
In 2012, the series celebrates the life of Sir Douglas Mawson. Mawson is well known for his pioneering Antarctic exploration and study, particularly for leading the Australasian Antarctic Expedition in 1911.

This was the most famous undertaking of a life lived for science by the explorer, scientist, geologist and university professor. This coin depicts Sir Douglas Mawson amid a map of the Antarctic territory, as a celebration of his scientific and geological studies within the area. He was knighted in 1914 for his achievements, and with the outbreak of WW1 served in the British Ministry of Munitions. On his return he pursued his studies, with the inclusion of further expeditions over several years to the Antarctica.

Although he made many achievements throughout his lifetime, it is the depicted image on this coin that will remain as his legacy.

Sir Douglas Mawson will always be remembered as one of Australia’s, and indeed the worlds, foremost scientific explorers.