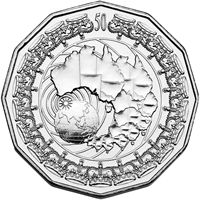 The Royal Visit coin represents “the stability of the crown contrasted with the rapid growth of Australia.” Australia is depicted as dynamically growing from the globe while the scope of the Queens influence is reflected by the star and ripples spreading out from the United Kingdom on the other side of the world. The coin is presented in an attractive presentation card.