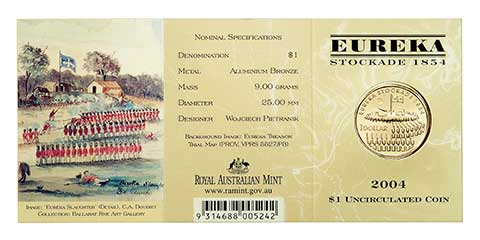 The 2004 $1 fine silver proof and the $1 aluminum bronze uncirculated coin commemorating the 150th Anniversary of the Eureka Stockade has been released by the Royal Australian Mint. This historic event took place on the 3rd of December 1854 in Ballarat, Victoria. The Stockade was a result of gold miners resentment of expensive and discriminatory taxes and the high-handed tactics of the authorities. This act of rebellion, courage and the raising of the crudely made blue and white flag is seen today as the origin of the Australian Spirit, the 'Eureka' flag has become a symbol of democracy and Eureka the birthplace of the Australian Spirit. The fine silver proof coin has been minted from 99.9% fine silver and has a limited mintage of only 20,000, it also comes with a Certificate of Authenticity which is numbered.For the first time, a letter 'E' will be struck on an Australian legal tender $1 coin and will be struck on the site of the stockade, now home to the Eureka Centre.