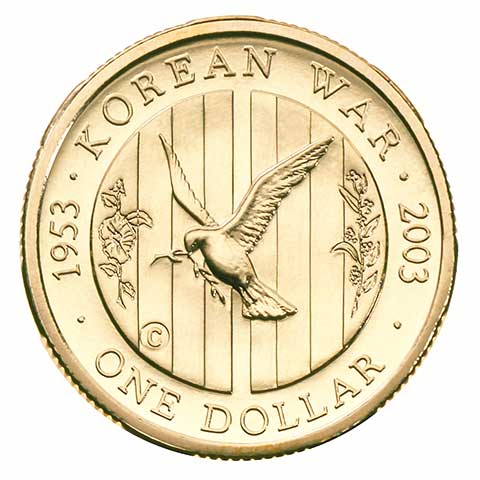 2003 represents the 50th Anniversary of the end of the Korean War. As a founding member of the UN, Australia was among the first countries to commit units of all three services to Korea in early July 1950, with 17,000 Australians serving until the armistice ended the fighting on the 27th July 1953. To honour the veterans who served in this important chapter in Australia's long and distinguished war history, the Royal Australian Mint is releasing this very special commemorative issue. The coin incorporates themes used in the Australian National Korean War Memorial in Canberra with the imposing vertical lines in the background of the design echoing the stainless steel spars around the memorial - a symbol for the fields of fallen. Emerging from this darkest of times is the dove of peace symbolising hope for the future and the floral emblems of Australia and South Korea reflect the ongoing tie between the two countries. The $1 aluminum bronze coin, bearing the raised 'C' mintmark of Canberra, is presented in the customary three panel card. The packaging of both issues carries the theme and imagery depicted in the coin including a photo of the War Memorial in haunting half-lit hues, providing a poignant reminder of the horrifying cost of war and the enduring quest for peace.