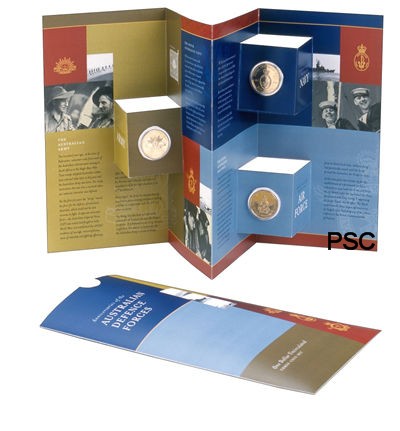 This set has been put together to celebrate our national forces, as they celebrate their 100, 90 and 80 years in existence respectively in 2001. Although each have been around longer, they were commanded by the British Government. The Army has been together since 1901 when the government of the time decided to join all the existing Colonial forces. The Royal Australian Mint has released this as a timely opportunity to pay tribute to all the servicemen and women who have served over the years, and still serve in our Defence forces today. These coins are presented in special packaging and has a limit to only 12,500 sets being produced. This is the first time that the mint has put a limit on the Bronze unc coins. Actual mintage is 12,342.