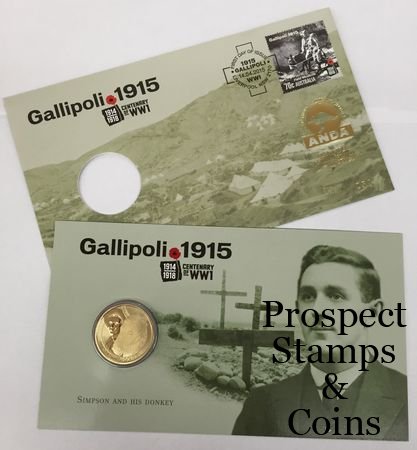 The Perth Mint and Australia Post are pleased to commemorate Gallipoli and the service of Field Medicine.

Private John Simpson Kirkpatrick is legendary for his courageous service. Born in England in 1892, he arrived in Australia in 1910. When war broke out he enlisted in the AIF as John Simpson, and was drafted into the 3rd Ambulance of the Australian Medical Corps. Soon after landing at Gallipoli, he rescued a donkey (possibly more than one) to help him carry the wounded.

Simpson worked day and night, whistling as if unconcerned for his own safety, despite the shrapnel and rifle fire. He was killed just three weeks into his service, on 19 May 1915, but his legend has lived on.

This overprinted Stamp and Coin cover was produced by ANDA for the Sydney Stamp Show. The show was held 16 - 19th April

This overprint was limited to only 250 covers.